We wake up early with high hopes of catching a flight to Lukla today. Due to poor weather conditions, we had to make an emergency landing yesterday in a small village halfway between Lukla and Kathmandu. To get you caught up, Lukla is the place where we need to be in order to start our trek to Everest Base Camp. Kathmandu, the capital of Nepal, is where we began and where there are currently dozens of other trekkers stranded at the airport desperately awaiting a flight. 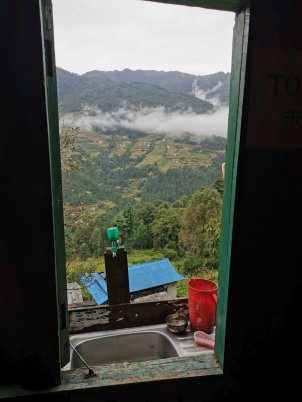 I stick my head out the window and stare optimistically at the bright blue sky as I brush my teeth and spit into the outdoor sink. There’s only a few scattered clouds in sight. I feel confident that today is the day!

I eagerly pack my bag and rush outside to wait. As I stand alone, I smile and take a deep breath of the fresh, crisp mountain air. It’s as quenching as a tall glass of cold water on a hot summer’s day. As I revel in my surroundings, I try to recreate it with words. How do I even begin to describe such a journey?! I sigh, recognizing that it will be a struggle to capture the magnitude of this adventure simply with words. Even pictures will likely not do justice to the 360 degrees of Himalayan mountains staring down at us. Just then, I startle as the old wooden door to our tea house creaks open and the remainder of my group comes out. Carrying all of our gear, we take a short stroll back to where we were dropped yesterday : an abandoned building, protected by barbed wire fencing, formally known as the Phaplu airport. 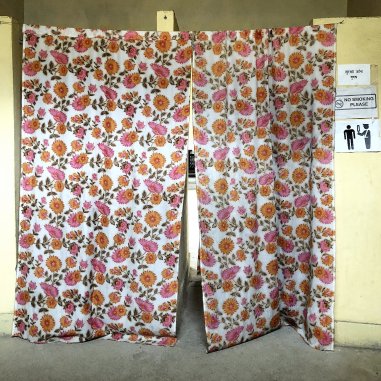 The concrete interior and stained yellow walls are somewhat cold, dark, and depressing. We walk through the building towards worn, floral curtains, which serve as a room divider. Judging by the piece of paper taped to the wall with a picture of a security guard checking a man, I am assuming that these are the ‘airport security curtains’. Since there’s no one working in this airport, we continue past the musty curtains and exit out the other side of the building.

We gather on the large, stone steps, which are antiqued with moss and lead down to the runway. After about 30 minutes of bantering, someone spots a small plane quietly soaring around the base of one of these massive mountains – it looks so minuscule compared to the exaggerated landscape. As it draws nearer, we can eventually hear the hum of its engine, confirming that it is, in fact, a plane and not a bird. It elegantly touches down on the landing strip while simultaneously jarring on its brakes, skidding to a complete halt beside us. As soon as it stops, we’re instructed to quickly load our bags into the front and back compartments and then board the plane. You can feel the tension of the rigid time schedule that this tiny plane is on. Once seated, we go through the same routine as yesterday : we are handed a mint and cotton balls, the engine roars, the plane fills with the smell of fumes, and we take off!

We’re in the air for approximately ten minutes when a small landing strip in the midst of the desolate chain of mountains comes into view – Lukla Airport! We all lean forward into the aisle in awe of this infamous airport. It’s absolutely stunning! From what I’ve read, this short and narrow strip of pavement, which is laid between a dropping cliff and a rock-faced mountain side, is an astounding 450m long and 20m wide. Due to its length and altitude, it’s deemed the most dangerous airport in the world! Nestled around the airport is a small civilization of dense, colorful buildings, likely hoping to reap some of the fruits of this gateway to Everest.

The landing strip slowly becomes larger and larger until we eventually thud down onto its tarmac. I feel a flutter of excitement as I am forced forward in my seat with this sudden change in velocity. I can’t believe we are finally here! To me, that thud signifies that we can officially begin our journey to Everest Base Camp! My greatest worry for this trip was not if I was capable of doing the trek, but rather if we would actually be able to fly to its starting point. So many peoples’ adventures end before they can even begin as flights are postponed until they are eventually cancelled. Once cancelled, these stranded passengers go to the end of the queue in order to not disrupt the other booked flights. Eventually, they are forced to choose an alternative trek since they no longer have enough time to properly acclimatize for Everest Base Camp. Luckily, we can still recover from our lost day, leaving us with our initial 8 days for the ascent but decreasing our decent to 3 days instead of the original 4.

Once we come to a complete stop, we quickly exit the plane. Airport workers begin tossing our duffle bags into a trolly as we are lead through a dense crowd of aspiring porters, hoping to find work from the incoming tourists. Most are barely old enough to be considered men. Their young faces smile at us as we walk by. One-by-one, we do our best to follow Dinesh through this bustling crowd as we are lead out the gates of the airport. 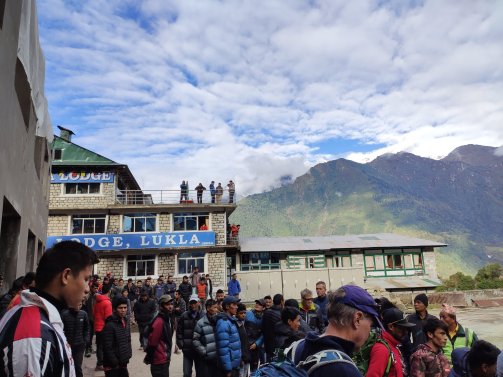 As we enter the village, the sight of Lukla fills me with great joy! After spending a few, frantic days in the chaotic city of Kathmandu, it’s soothing to get to this calm and quaint village in the mountains. There are kids playing in the street, stray dogs looking for scraps, and locals tending to their shops. This is my happy place! I have a theory that there are two kinds of people in this world – mountain people and water people. I am, without a doubt, a mountain person! However, I hold nothing against water people … after all, I did marry one.

I admire the panoramic view of the Himalayas as I follow along the cobblestone pathway, which leads through the middle of the village. This is the first chapter in so many people’s great adventure – whether it be to the base camp or the summit, it all starts here! I try to image the stories of those who have traveled this path before me. I take a deep breath in an effort to calm the flutters in the pit of my stomach.

Dinesh leads us into a building on the left; we follow him up a set of wide, wooden stairs, which look like they belong in a Victorian-styled manor. We reach the top floor and turn left once again into a restaurant. As we take a seat, we see a sign indicating free internet, so we all try to connect to the shotty wifi to reassure our loved ones that we did not crash and die.

As we settle into place, we are served Masala tea – a popular drink within the Indian subcontinental area. As I sip this warm beverage, I am surprised to recognize its flavors … warm milk with hints of cloves and cinnamon … chai!! As I look up from my drink, I see seven new faces eagerly staring at us. Dinesh begins to introduce them, as these are the remaining members of our team. I always love these initial introductions because today these guides and porters are complete strangers. For the next few days, we will struggle to remember each other’s names as we slowly become better acquainted. However, in fourteen short days, they will become cherished friends that helped us get to the base camp of Mount Everest. We will have laughed with them, shared stories and experiences with them, and, as we sadly part ways, they will forever hold a treasured place in our hearts.

Five young boys stand closely together, along with two others, perhaps a few years older, standing a bit more separate and closer to Dinesh. The five boys appear enthusiastic and use their fragments of English to say ‘hello’ as they introduce themselves as our porters.

Then Dinesh turns to introduce the other two. The first man introduces himself as “Sancha”. He is in his early 20’s, with thick black hair. He is fairly tall and lean, and is dressed in various layers of hiking clothes. He speaks comfortably in English and says that he will be one of our assisting guides during our trek. The next man steps forward and introduces himself as “Mane” (pronounced “Manny”). He’s a bit shorter than Sancha, but is also slim, has tanned skin, and dark brown eyes. He wears a black trucker-styled cap with sunglasses resting on its bill. Mane struggles a bit to find his words in English to explain that he, too, is an assisting guide.

And just like that! We are finally in Lukla, we have our team of three guides and five porters to help the nine of us trek for the next eleven days to and from base camp of the mysterious and lethal Mount Everest. Let our adventure officially begin!

I am a travel blogger from New Brunswick, Canada and am very passionate about travelling and adventure! I absolutely love going to new places, trying new foods, meeting new people, and having a lot of fun! My adventures range from catching a wave on the North Shore in Hawaii and being breathless on the summit of Mount Kilimanjaro, to living in a Westfalia van on Vancouver Island and being awestruck by the starry nights in the Sahara desert! I look forward to blogging my adventures and hearing your comments, feedback, and own personal stories! Cheers 🤙 View all posts by wanderingmandy2018

One thought on “Everest Base Camp: Flying to Lukla (part 2)”

This site uses Akismet to reduce spam. Learn how your comment data is processed.

When you can't go to Mexico ... Bring Mexico to you 🌮
The algorithm explaining why my posts and blog are not always active or consistent 😳
JACQUET•RIVER•GORGE
My life is now complete ♥️
Good Morning Charlottetown ☀️
On Cloud Wine 🍷